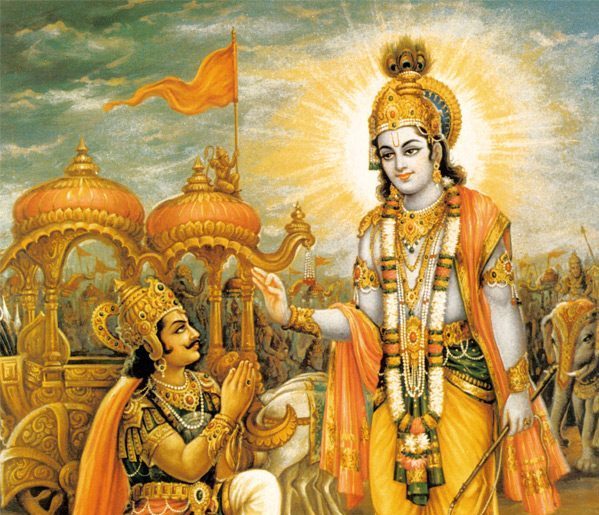 In the sacred text Srimad Bhagavad Gita, Kurukshetra symbolizes our human body: the 5 elements are the 5 pandavas where Arjuna symbolizes the jivatma and Lord Sri Krishna is the antaratma (inner soul, almighty God, guru). When Arjuna (jivatma) starts practising Kriya Yoga according to his guru’s advice, the war begins (sadhana begins). Initially when Arjuna starts practising Kriya Yoga he has to conquer the vikaras (Duryodhana and his companions). At that time Arjuna or the jivatma experiences a dilemma as to how will he get rid of lust, anger, greed, temptation, pride and jealousy etc. from which he has obtained material happiness life long. He will have to leave his bodily and worldly pleasures. He feels he will not be able to do it. Hence he gets ready to forego the practice of Kriya Yoga. At that time Krishna explains that the body, mind, intellect and sense organs are all temporary and short lasting. Only YOU BECAUSE YOU ARE A PART OF ME is permanent and immortal. You are an eternal, true, immortal and joyful form (satchitananda). To remain in the everlasting, true immortal and joyful form (satchitananda) practise Kriya Yoga. Fight the battle. Firstly defeat the bodily ego (Bhishma). Then defeat the adamancy (Drona) to live with the vikaras (impurities and the crookedness). Then defeat Duryodhana and his companions (the evils like lust, greed, envy, anger, pride and temptation).
When the disciple of Kriya Yoga starts practice at first prana enters into Shushmana nadi and pierces Muladhar, Swadhisthan and Manipur chakras. Only after that his mind got purified. Once it reaches the Anahat chakra the path ahead becomes easier. The sadhak is filled with divine love. With a rigorous practice of LEVEL 1, 2 and 3 the sadhak’s consciousness reaches the Anahat chakra. Then in LEVEL 4, the sadhak’s consciousness reaches the Agya chakra. After regular practice of LEVEL 5 the consciousness reaches the Sahasrara chakra. Then Arjuna is able to see Lord Krishna in his vishwaroopa (the majestic, universal form). Then Arjuna (jivatma) surrenders to Krishna bows down and promises to follow the teachings of Krishna by saying:
“नष्टो मोह: स्मृति लब्ध्वा तवत्प्रसाद मया अच्युत
स्थितोष्मी गतसन्देह :करिष्ये वचनं तव” chapter 18 verse no. 73
Arjuna says: Oh Krishna, Your mercy and grace have helped me destroy my worldly temptations and bondages. I am free from all doubts now. I am ready to follow all your instructions.
In reality, every jivatma is Arjuna and whoever wishes to free himself or herself from all kind of miseries and to be established in his true nature satchitananda has to fight the battle of Mahabharata. The battle is tough but the results are highly fruitful. By practising Kriya Yoga with faith, devotion and regularity according to the advice of the guru, the soul will be liberated from the cycle of birth and death and achieves a state of everlasting bliss and joy.